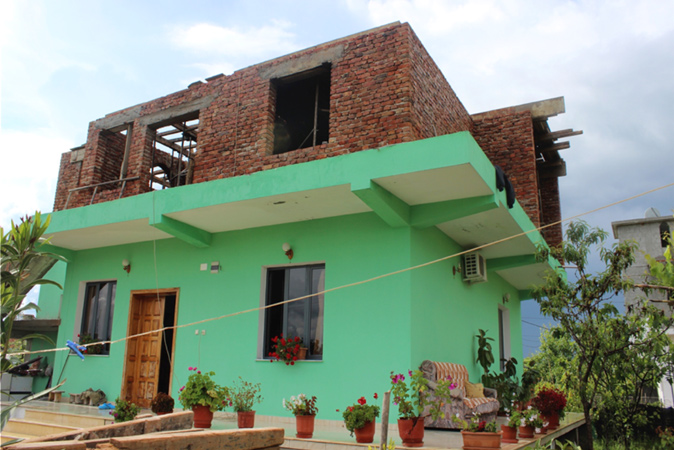 Everybody lives in shanty towns in Belize. I lived in a little shack there once for three months. It’s all timber framed buildings and everyone builds their own. They have some professionally built places for hotels and that but they’re all built from wood. Brick is too expensive. They don’t feel very secure though, there’s guns everywhere. They build the first floor, then roof, second floor, then roof, third floor and then don’t put a roof on top of it. It’s probably for tax purposes.

You don’t see homeless people in Albania because they can just build their own.

So where in this country can people build? The weather causes problems for this type of building, as well as government regulation. Where can you get the money to build and put electricity in and that?

I don’t see a problem with squatting. Buildings are sitting there year upon year empty. Just as long as you don’t destroy them or make a mess, I don’t see why there should be a problem.

But the Tories changed the law on squatting so it makes it more difficult.

I was squatting in a breeze block building that was built whilst they were making the new library. I was there for five years.

Then there’s beds in sheds. Cheeky bastards rent their sheds out, should just let people stay there.

Which land can you use?

I saw something about PROTOHOME-type houses being built in France where they’re moving refugees into them in the campsites in Calais. It shouldn’t be necessary to do things like this.

I thought about shanty towns when I heard of this project.

I think we’ve lost the ability or the imagination to build our own housing, nowadays people don’t really bother.

I went to Borneo and I was sleeping in a hammock in the trees. We made mud huts. We made a wooden frame and then added mud. We were there 6 months and each would take 6 weeks to build. It was the only way that they could put a roof over their heads.

There’s a survivalist on YouTube who does wattle and daub houses. He makes them big enough just for himself and builds his own accessories and furniture.

I think the ruling classes have got rid of our traditional skills and removed our ability to survive so we have to rely on someone else higher up the chain to help us survive when catastrophe happens. The new world order. We will be enslaved to them.

Allotments are going, the steel industry has gone, coal mines have shut, shipyards have gone. We’ve lost the ability to use our hands.